The Lihiran Equity Trust Fund was initially established by a Deed of Settlement dated 14 August 1997, to acquire shares in Lihir Gold Limited. This was initially managed for and on behalf of the Beneficiaries by MRL Resources Lihir Limited, a wholly owned subsidiary of Mineral Resources Development Company Limited. In 2006, major trust arrangements were amended. MRLC obtained a court order and amended Clauses 6 and 13 of the Deed to firstly, enable the Trustee to dispose of the LGL Shares in any manner however, had to ensure that the main purpose of the Trust was maintained. Secondly, to enable the Trustee, to manage and control the property of the Trust in the interests of the Lihirians. By a Release of Security dated 27 January 2006, executed between EIB, MRDC and MRL, MRL was discharged from its loan obligations with EIB. This allowed MRL to sell all the LGL Shares,  settled its loan with EIB and subsequently changed its name to MRL Capital Limited on 17 December 2008. MRL Capital Limited has to date managed the LET on behalf of the Lihirians.

Clause 3 of the Deed, sets out the purposes of the Trust. Paragraph 3(d) states:

The Manner of Distribution of income derived from investments are to be distributed in the following manner:

o   25% is used for funding of community projects in education, health and infrastructure on Lihir; and

o   25% is distributed to eligible Beneficiaries 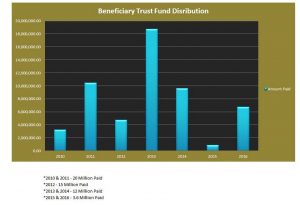